Born Sarah Bolling Mason Hutchins in Baltimore, Md. to Sarah Mason and Carlos Hutchins (a golf pro, who in 1942 was secretary of the Citizens' Civil Rights Committee, which formed in response to the segregation of Baltimore's all-white — and better-maintained — golf courses), Sallie Blair had all the ingredients to be a much bigger star than she was. In his memoir There and Back, Jazz drummer Roy Porter claims it was an alcohol problem that held her back from greater success, though I have not seen any corroboration of this. 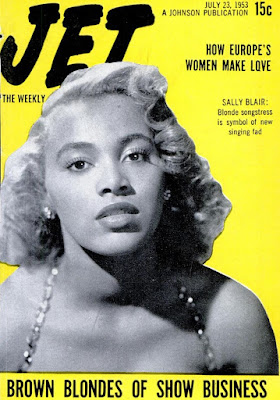 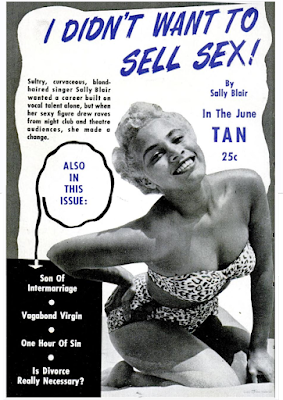 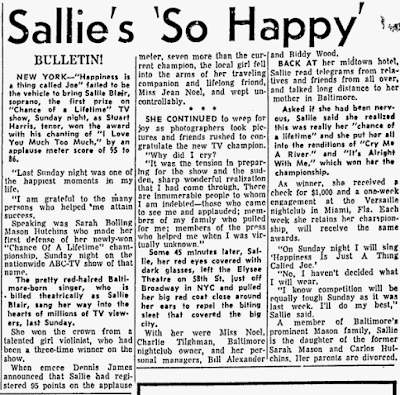 Washington Afro-American January 17, 1956
"The jaded eye I reserve for night-club openings (the one on the left that droops a little) got the shock of its life (and that's a metaphor that droops a little) the other night … it was present with the rest of me for the Sunset Strip debut of a lady who electrified an audience like nothing I've seen since the dawn of Eartha Kitt … Her name is Sallie Blair … and her opening night was a spectacle of the crazy, wonderful things that happen once in a while in show business … She came here unknown to Mocambo's ringside regulars. But before she had returned for a final encore, even Herman Hoover had heard about her … Miss Blair is going to be a star … And while I'm not a gambling man, I'd take a friendly bet on it … She looks like Abbe Lane … And when she sings, she sighs … A combination like that, I can tell you from personal experience, does more for us folks over 35 than Serutan … If I sound a little giddy about the lady, I am … This young lady could sing 'Old Gray Bonnet' and make it sound suggestive." Paul Coates, The Los Angeles Mirror-News (as reported in The Baltimore Afro-American December 22, 1956) 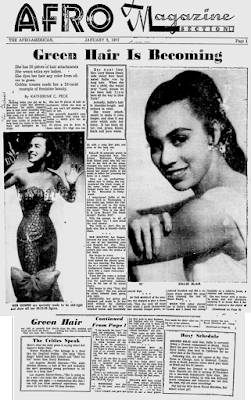 Life Dec. 2, 1957 "Sallie, Season's Hit Singer" Photo by Eliot Elisofon
"She Serves a Nice Cup of Tea"
"The thrush handles the tune nicely and with class.
Strong competition looms, however, from the Tony Martin disk.
Playable for Jocks." Billboard October 27, 1958 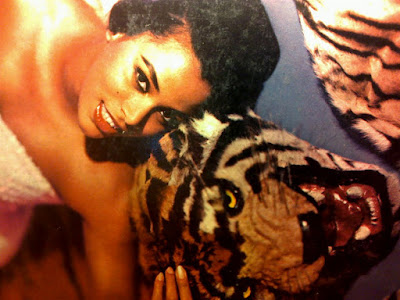 A closeup of my copy of Hello, Tiger! Nicely arranged and conducted by Neal Hefti but with way too much reverb on Sallie's voice. My favorite tracks "Whatever Lola Wants (Lola Gets)," "When the Sun Comes Out," "Fever," "Daddy." Her LP Squeeze Me does a better job of letting her stage persona shine through as well as what Mr. Winchell was talking about. 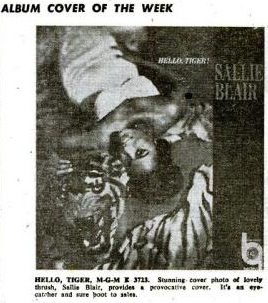 "A striking cover (featuring the sultry thrush on a tiger-skin rug) gives this package sock display value; while the canary's sexy, intimate vocalizing makes the LP's sure-fire Jockey programming. Gal shines on a group of standards and show tunes, including the infectious 'Daddy,' 'Fever' and 'Witchcraft.'" Billboard November 3, 1958

"Ev'rything I've Got (Belongs to You)"
Hello, Tiger! 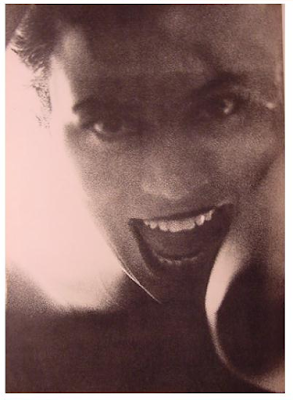 Esquire, January 1959 "A Blare for Sallie" photo by Bert Stern
This issue of Esquire is famous for Art Kane's two-page spread photograph of four decades of jazz musicians, often called "A Great Day in Harlem." 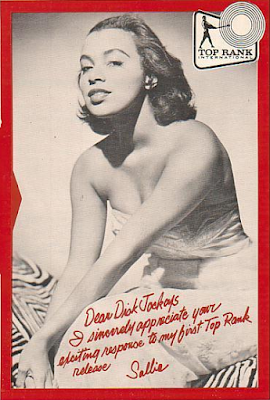 "I believe every woman should emphasize her natural attributes. If the new look coincides with her figure, she should wear it. As for myself—not this year."
Jet April 7, 1960 "Paris' new flat look has debates bustin' out all over" 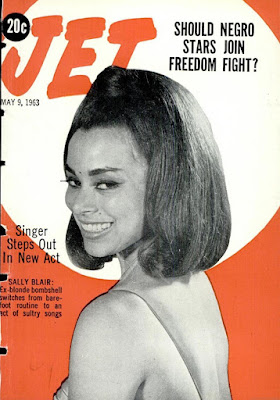 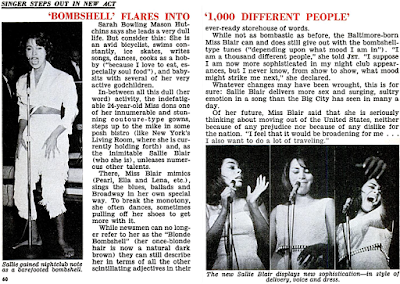 Still getting mentioned in Jet as late as 1978 but they've gone back to misspelling her name! 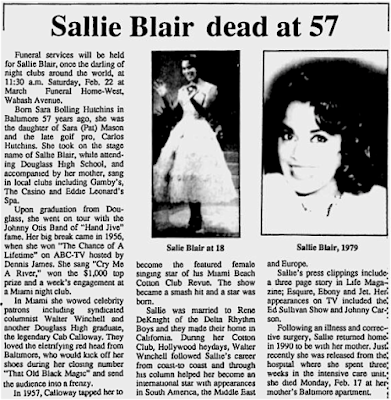 Thrillist takes a look at  Ben Cooper Hallowe'en costumes  and the changes in modern American Hallowe'en celebration. Ben Cooper competitor Collegeville's box art was my inspiration for the pic above, for the blog a few years ago.