Can I get a Witness? 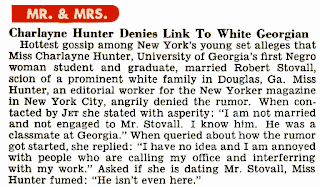 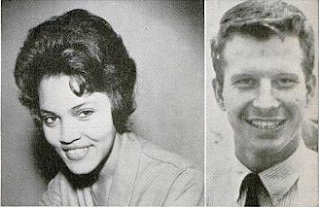 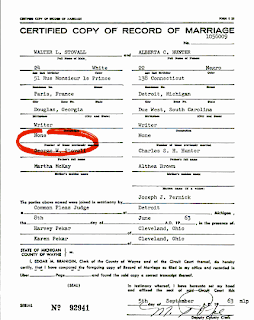 after: the marriage certificate of Hunter and Stovall;
witnesses were Harvey Pekar and his first wife, Karen
(Jet magazine/ September 19,1963)

South Carolina-born Charlayne Hunter Gault is a noted American figure in that she and Hamilton Holmes were the first black students to attend the University of Georgia, Athens in the early 1960s. The pair suffered terrible racial attacks and still made it to the top of the heap. For the past forty years Mrs. Gault has had a successful career in journalism, here in the United States and as a foreign correspondent.
Someone to admire? Most definitely!

In the year of 1963 — at age twenty-two, she married her first husband, a white man named Walter Stovall.
A handsome couple? You bet!
The couple met on the campus of U.G.A., dated in secrecy (usually traveling west, to Atlanta as it was more liberal at the time). Stovall was the son of very wealthy, very connected parents. As soon as word got out, the angry, racially tension-filled people of Georgia (Remember, this was and still is the South!) wanted both of their heads (More or less, hers — I am guessing.). Georgia's then Attorney General Eugene Cook said "We're waiting to put 'em both in jail!"

The pair married in a civil service ceremony in a Detroit, Michigan courthouse.
They made their home in New York City. And had a little girl, Susan.
Their union lasted for roughly a year or more.
Underground comic book writer and Jazz critic Harvey Pekar and his first wife, Karen, were their witnesses (See Hunter and Stovall's marriage certificate above). How The Pekars knew the Stovalls is not exactly known. Were Harvey and Karen taking care of business at the courthouse and the four struck up a conversation on the spot, which lead them to being their "best man and woman"? Did they share a love of Jazz and were friends beforehand? Someone knows. Harvey may have.

While flipping through old copies of Jet magazine (the Hunter/Pekar connection), I told Bob and it blew our little minds.
Pekar passed away today.
The story is an interesting one even if it may (or may not be) the full story.
1960s Charlane Hunter Gault Harvey Pekar

Dusty said…
Lex10: Yes…Yes, it is. From other articles I have read regarding this marriage - Hunter/Stovall - Ms. Hunter-Gault does not speak of this union. It would be interesting to find out if she recalls The Pekars being their at the courthouse.
Friday, July 16, 2010 at 9:12:00 PM EDT

In the October 1963 Negro Digest a reader asked "Once Sallie Blair seemed en route to the Bigtime. Her photo made Esquire's center spread, and she was booked into the de luxe supper clubs. What happened?" The reply was "That's show business, really. However, Miss Blair now has a new act and a new look and is on the way up again." Walter Winchell called the beautiful nightclub singer who often performed barefoot "Sex with a capital X" and "sort of like Lena Horne with baby fat." She received mentions in Dorothy Kilgallen's column as well as in often gossipy-toned items in Jet magazine. Born Sarah Bolling Mason Hutchins in Baltimore, Md. to Sarah Mason and Carlos Hutchins (a golf pro, who in 1942 was secretary of the Citizens' Civil Rights Committee, which formed in response to the segregation of Baltimore's all-white — and better-maintained — golf courses), Sallie Blair had all the ingredients to be a much bigger star than

Thrillist takes a look at  Ben Cooper Hallowe'en costumes  and the changes in modern American Hallowe'en celebration. Ben Cooper competitor Collegeville's box art was my inspiration for the pic above, for the blog a few years ago.